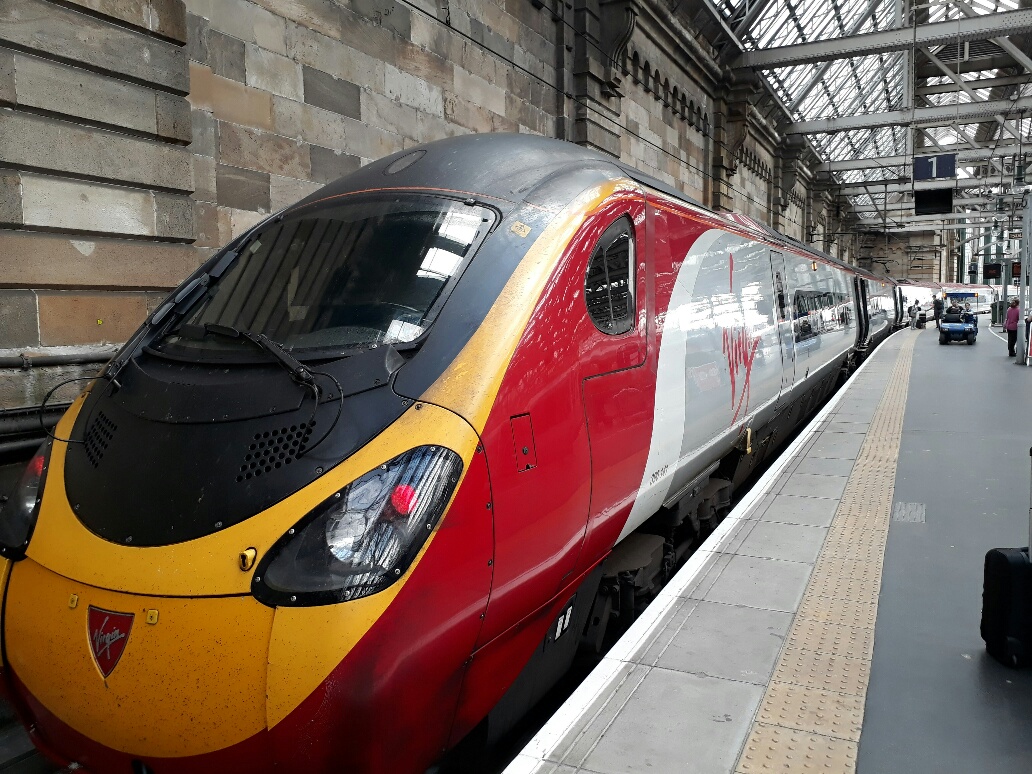 The best way to get from London to Glasgow

For our leap from London to Glasgow, we decided to try the train. We have trains at home of course, but not the fast long distance type. As this was our first time, we decided to splash out on first class and the service provider, Virgin, seemed appropriate as well.

We booked online before leaving New Zealand, selecting single seats either side of a table. This came with the risk of not meeting some fascinating fellow travellers, but that was offset by the benefit of being able to talk to each other exactly as we pleased.

The train conveniently departed from Euston Station, a 10 minute suitcase drag from our rented apartment. We entered the station, checked the departure board and took the escalator up to what looked like a place for a morning coffee. That’s when we spotted the Virgin first class lounge. Perfect. The whim was working out nicely. A friendly welcome, comfy seats, self-serve coffee and pastries were all included.

The lounge departure board signalled our 15-minute warning and we headed to the allocated platform. At this point we discovered that while our home-printed tickets indicated first class, they failed to mention our reserved seat numbers. It was the exciting equivalent of entering an aircraft with no boarding pass. I could vaguely remember carriage J, but as the clock was ticking we were ushered to U, the one reserved for unallocated seating. It wasn’t first class so we walked through to the next one, which was, and found ourselves in a carriage almost to ourselves. We stowed our suitcases in the handy racks opposite the bathroom and chose seats equivalent to those we’d reserved. As we pulled out of the station, the ticket checker assured us we’d be fine where we were. And so the effortless service continued.

As the train gathered speed it felt like we were floating on a cloud, but some reassuring train movements returned when we began to outpace cars on the adjacent motorway. Tea, coffee, water and snacks soon arrived as we hurtled through the outer suburbs of London. That’s when we noticed it was a leaning train, called a Pendolino. The carriages lean into the corners, keeping passengers and refreshments effortlessly in place, and allowing the train to travel at high speeds on normal winding tracks. Another benefit of the train’s inclination skills became apparent when we made our first stop. The platform must have been lower than most, so the carriages simply leant over until the exit steps were at the right height. Neat.

I was quite glad our carriage was almost empty. It meant we could share our excited appreciation for this new form of travel, without appearing like complete newbies in front of the global standard of emotionless commuters. While the view became increasingly rural and picturesque Jo, who was facing forward, would point out highlights that I’d get to see some moments later. It was a bit like watching a movie when the sound is out of sync. I too was making the mistake of encouraging Jo to look at things that were already well behind her.

The initial excitement of seeing the English countryside eventually subsided and we simply sat back to soak it all in. To keep track of where we were, I fired up Google maps. That little blue dot sure was moving and I wondered what our speed really was. After a quick search I had downloaded a free app called Velociraptor, which neatly overlays a speed display on the map app you’re using. There it was, regularly nudging 212 kilometres per hour. No wonder it felt quick, especially when you pass another one going the other way.

Lunch arrived in time to stop me fiddling with gadgets, and we both enjoyed a delicious gourmet sandwich washed down with a very generous glass of wine. This was fun. The wide seats still felt ridiculously comfortable, the service trolley didn’t clog up the aisle and there was no seat belt sign for the captain to turn on and leave on, just when you need to go to the loo.

As we slowed into Glasgow, the urban landscape grew and we got a great view crossing the Clyde River before gently pulling to a halt at Central Station. The four-and-a-half hour journey had felt more like two or three hours. Disembarking was a breeze. A few steps from your seat to pick up your suitcase, then wheel it onto the platform and out to the downtown streets. A short walk later and we were settling into our new city apartment.

With trains, most of your time is spent travelling in comfort, not waiting in queues and at the departure gate. Also, the stations are generally central so you usually save on the time and cost of airport transfers at each end.

We were definitely looking forward to our next fast train journeys, scheduled for a few weeks later in Portugal.

“Travel is fatal to prejudice, bigotry, and narrow-mindedness, and many of our people need it sorely on these accounts. Broad, wholesome, charitable views of men and things cannot be acquired by vegetating in one little corner of the earth all one’s lifetime.” Mark Twain