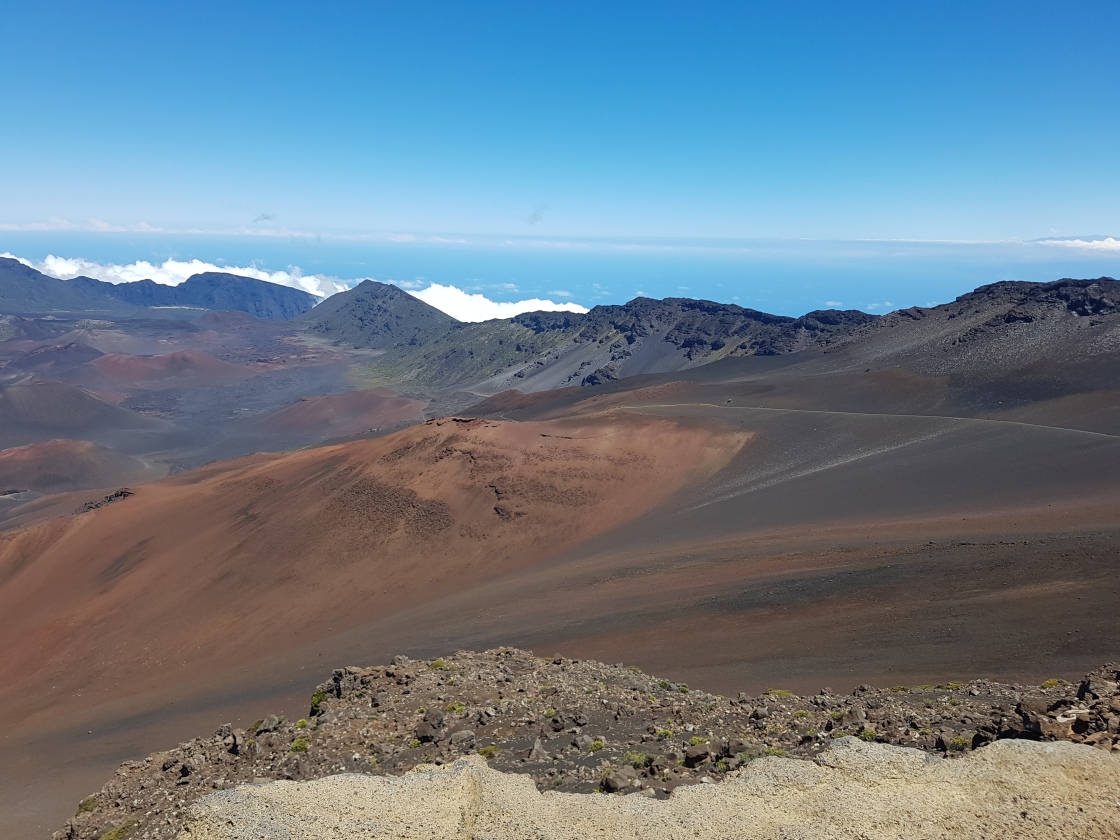 Maui top things to do (including the top!)

There’s a lot to love about Maui, even if you don’t own a surfboard. Shaped like a dumbbell – big volcanic lump at each end with a skinny bit in the middle – the island offers a mixed bag of treats for adventurous travellers.

We recently spent a week on Maui, holed up in superb VRBO accommodation in Kihei. Our condo was dated, but its outlook was astounding. Absolute beachfront at Kehei, with a lanai (balcony) perfectly protected from the prevailing wind. Check out Bob’s place if location matters more than interior decorating.

Of all the things we did at Maui, these are the experiences that stood out for us:

We managed three snorkelling expeditions on Maui, but this one was easily the best. It’s watched over by fervent Parks Service rangers, which helps to keep it in good health for great viewing. The attention starts in the car park, where a zinc-coated ranger briefs us on the areas to snorkel and reminds us that only zinc and titanium based sunscreens should be used here. The chemical screens affect the coral. Fortunately, we’d already read about that and coated ourselves with Murray’s Triumph & Disaster, which ticked the right boxes.

The feature colour at Ahihi Kinau is yellow. Huge yellow coral bommies, yellow and black butterfly fish, and bright yellow tangs fluttering everywhere like leaves in autumn. The water’s clear because there’s no sandy beach to mess it up, just good ol’ basalt lava flow – ubiquitous in Hawaii. An excellent snorkel on every count, with a couple of green turtles thrown in for good measure.

On a map the drive up to this park looks torturous, however the reality is a pleasant surprise. It’s twisty and turny, but the road surface is smooth and the camber is well-engineered. Our Cadillac, Hank the Yank Tank, handled it with ease. The views are ear-poppingly good, as you go from about 100 feet above sea level to 10,000, and there are plenty of ‘overlooks’ for photography (that’s American for lookout). It costs $25 to enter the park, which in our case was taken by a young woman in the cutest ranger’s uniform. Straight out of Yogi Bear.

At the visitor centre, a lava rock building that tones perfectly with its surroundings, we get advice on where to go for about three hours of hiking. The answer is “down”; into the vast valley that’s populated by a proliferation of volcanic cones. Awesome doesn’t even begin to describe the landscape. It’s straight out of a science fiction novel: red and silver scoria, perfectly formed mini cinder cones, alien plant forms (a native aloe called silversword) and whirlwinds of volcanic dust.

The going down was easy. Almost skipping we were. However the pained expressions of those coming back up were a good indication that the climb out was far from skippy. At the 1.5 hour mark, we turned around on the Sliding Sands trail and started up. Very quickly it was obvious that the heart-lung respiratory system doesn’t work particularly well at 10,000 feet. It’s like hiking with a 200kg pro wrestler strapped to your back. Frequent stops are essential, but you can cover up this weakness by pretending you’re taking a macro photo of a silversword plant or lava formation. We did a lot of photography on the way back up…

Maui’s other big win was a sushi restaurant hilariously named Miso Phat. Tucked away in an unassuming Kihei shopping centre, this place is what happens when you mix fine art and sushi. We tried the TNT roll (shrimp tempura and crab roll topped with ahi poke and served with unagi sauce and agave honey), Rainbow roll (traditional California roll wrapped with tuna, yellowtail and salmon topped with tobiko and sesame seeds) and the 007 roll (spicy tuna roll topped with shrimp and avocado covered with unagi sauce and sesame seeds). 007 was the favourite. It hits all the flavour buttons fortissimo. This restaurant has raised the sushi bar in Hawaii; I hope they sell the franchise to a New Zealander soon.

“Travel is fatal to prejudice, bigotry, and narrow-mindedness, and many of our people need it sorely on these accounts. Broad, wholesome, charitable views of men and things cannot be acquired by vegetating in one little corner of the earth all one’s lifetime.” Mark Twain